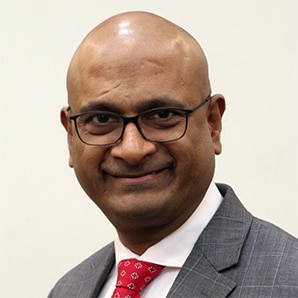 Ravi Viswanathan is currently the Chief Marketing officer (CMO) at Tata Consultancy Services (TCS). Prior to this role he was the President of TCS Growth Markets business, which includes Middle East Asia, Africa and India. He was also responsible for the work done in the Public Sector – Government space worldwide before moving to his current role. During his tenure as President, he has strategized and partnered with several key customers in their digital growth and transformation journey.

Ravi is credited with growing the Chennai Operations of TCS , the largest TCS centre globally, to where it from an employee base of 8,000 to over 70,000 spread across 16 centers.

Ravi started his career in TCS in 1990 and has handled a variety of roles such as sales, large program management, Building and managing key customer relationships globally.  He was Head of Global Telecom Business prior to this and in that role, has significantly rewritten the rules of the Telecom business which enabled many telcos to reinvent their business. He also started the TCS operations in Scandinavia when he moved to Copenhagen in Denmark in 1994.

Ravi is an Electronics and Communications Engineer from the University of Madras. He is the former President of Madras Management Association and also a Distinguished Alumni Awardee from NIT-Trichy.

His passions include reading, blogging and golfing.  At work, Ravi has a passion for nurturing young minds.