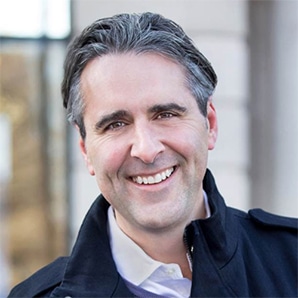 John Della Volpe is Founder and CEO of SocialSphere and the Director of Polling at the Harvard Kennedy School’s Institute of Politics. The Washington Post referred to him as one of the world’s leading authorities on understanding global sentiment, opinion and influence especially among Millennials and in the age of digital and social media. John has advised heads of state, Fortune 100 CEOs, military generals, athletes and entertainers on how to use public opinion to tell their story, identify and empower key audiences.

John appears regularly on MSNBC’s Morning Joe and his insights on America’s youth are found in major media outlets in the U.S. and abroad, including the Daily Show with Trevor Noah.

In 2008, he received an Eisenhower Fellowship for which he traveled extensively throughout China, Hong Kong, and Korea (including a supervised day in North Korea) studying Millennials and their use of social media. In 2018, John received the Arthur E. Hughes Award for Career Achievement from the University of San Diego; and in 2013, was named a “Future Legend of Marketing” by the Ad Club of Boston. In 2011, John was honored to serve on the U.S.-Russia Bilateral Presidential Commission on Media.