Clay Christensen: Lessons Learned in Marketing and in Life From the Father of Disruption Innovation

Clay Christensen, well-known academic, author, and business consultant, passed away recently and ITSMA would like to pay homage to this Father of Disruption Innovation who leaves lessons for all of us in marketing and in life.

We were honored to have him as a keynote speaker at our Marketing Vision conference in 2006. His remarks sparked demand for a deeper exploration into his thoughts about disruption and innovation. Julie Schwartz, ITSMA’s SVP, Research & Thought Leadership, interviewed Professor Christensen after his presentation and their conversation was captured in an ITSMA Viewpoint that we would like to share again with members and the greater community.

While some of the companies and their products cited in this piece seem outdated, his insights as to what led to success and failure in the face of innovation are as relevant now as when he conceived them. 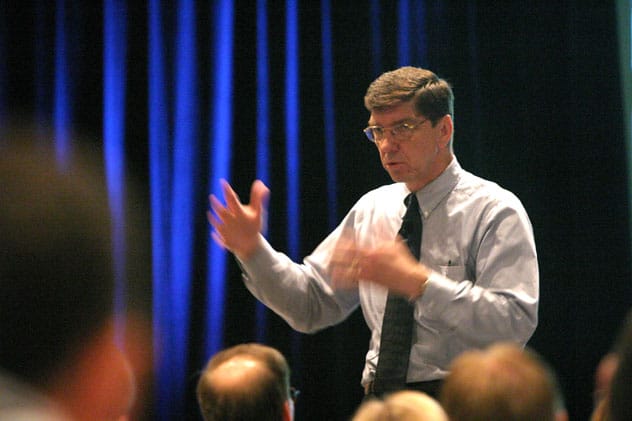 Professor Christensen was intrigued by the question, “What is it that kills successful companies?” If you look at business history, he mused, almost every company that at one point was widely regarded as unassailably successful is, just a few short decades later, either in the middle of the pack or at the bottom of the heap. Why is this? After studying the phenomenon, Christensen reached the odd conclusion that it is actually the paradigms of good management that were taught at the Harvard Business School that sowed the seeds of every company’s ultimate demise. In other words, “If you’re wildly successful, you’re doomed.”

Interestingly, on the other side of every one of those corporate fatalities was a tremendous entrepreneurial success story. Christensen’s second wave of research focused on how entrepreneurs starting new ventures and innovators within existing companies can reignite growth. Is there a way to grow a business with a high probability of success that would allow innovators to squash an established, well-run competitor?

In this ITSMA Viewpoint, originally published in March, 2007, Christensen, Harvard Business School professor, co-founder of Innosight LLC, and author of The Innovator’s Dilemma (1997), The Innovator’s Solution (2003), and Seeing What’s Next (2004), discusses disruptive innovation—how to do it, how to survive it, and how marketing can help.

Want the latest news from ITSMA?

Subscribe to our newsletters and alerts for ITSMA blog posts, research publications, events, and more.